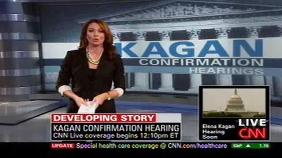 Elena Kagan‘s hearing is underway and cable news is making a major push to cover large portions of it.

Of course, this now opens the door to a discussion of all the storylines that were introduced by the media back when Kagan was named Pres. Obama’s Supreme Court pick. Here’s what cablers have been talking about today.

We last looked at the major topics being discussed regarding Elena Kagan in mid-May during the first 24 hours after her announcement. At the time, “Harvard” was a major theme – “experience” was close behind.

Using TV Eyes, here’s a chart of how cable news has discussed Kagan from 6amET-12:30pmET today:

The most discussed topic overall is her “experience” – or, more specifically, lack of the judicial kind. Her time at Harvard has thus far taken a backseat to a more controversial question: is she “liberal”? Fox News is leading in mentions of Kagan and “liberal” but the other networks, CNN and MSNBC, are close behind.

It will be interesting to see how her relationship with the military makes appearances in the media. So far it is MSNBC that has discussed it the most – her stance on military recruitment on the Harvard campus. Expect this to be a topic as Senators begins their question and answer period of the hearing, so it will likely grow as a topic on cable news as well. We kept on the terms “single” and “socialism” from last month, although they seem to have disappeared from the cable news vocabulary so far.

As cable news networks jump in and out of coverage, we’ll know more about what they deem most important as the week progresses. But as Kagan listens to opening statements, expect her experience, questions about her liberal politics and her take on the military to become major media topics.