End Of The Republic? Glenn Beck Laments To Stossel The Lack Of Student Hugging
video

End Of The Republic? Glenn Beck Laments To Stossel The Lack Of Student Hugging 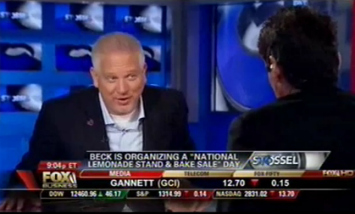 On Thursday evening’s episode of Stossel on Fox Business Network, the eponymous host (and, full disclosure: my former boss) interviewed Glenn Beck on the question: “Is America in Decline?”

Predictably, Beck’s answer was a resounding “yes,” but his reasons included some…interesting…points, namely: the lack of teacher-student hugging; the war on kids’ lemonade stands; and “chaos” in the cities.

“Is America in decline?” Stossel began the segment. “Many people say yes. Few have said it as often or dramatically as Glenn Beck. He used to spend an hour every night on Fox — from this studio, actually — saying that ‘the survival of our republic hangs in the balance’ and wondering if ‘we will close the book on America.’ What do you mean?”

“I don’t know if I said we’re going to close the book on America,” Beck denied. Stossel pointed out that Beck did, indeed, say such things.

Speaking largely in platitudes, Beck gave his explanation for why America is in decline, starting with his belief that “we are a country that is damn-near insane in major cities and in Washington, D.C., and detached from everything that we used to hold dear.”

“Detached from everything we hold dear?” Stossel pushed back. “Chaos in the cities? I don’t see that.”

After a brief segue about over-regulation in America and “the road to serfdom,” Beck then explained his decision to organize a national bake sale and lemonade sale day, in response to local stories of police and governments shutting down child-organized sales. “We’re teaching our kids all the wrong things,” he said.

– RELATED: An Open Letter To Glenn Beck From The Guy He Called A ‘Moron’ And ‘Buffoon’

Stossel wrangled Beck back to talking about hugging, and clarified Beck’s point that our litigious society has led to, according to Stossel, teachers being told: “Don’t put a crying child on your lap to comfort her, even in kindergarten, never touch a child because of fear of lawsuits, fear of accusations.”

“We’re teaching people not to connect with others,” Beck said. “Instead of getting sued, don’t reach out for a child who is seriously distraught and hug them and comfort them.”

Stossel expressed skepticism that these problems are that severe, saying that most people work around the rules. He brought up that Beck once told Fox’s Andrew Napolitano that “I don’t think we will survive 2016.”

“I don’t think we will,” Beck replied. “Do you think we’re going to make it on this track we’re on?”

Stossel pragmatically replied, “I think in 2030 we will be bankrupt and suffer great hardship, but I think the republic will survive.” Beck disagreed, citing the Greek turmoil: “As Europe goes, so will we. People listen to the extremes.”

“You were anticipating riots [here] from the extremes,” Stossel then asked. “And violence in the streets.”

“Still do … We will have real problems in the streets around the election time. I think we will have them his year,” Beck said, citing “six murders” at Occupy Wall Street as proof that we will face anarchy.

A skeptical Stossel countered that, in America, “the murder rate is down, the teen pregnancy rate is down, school violence is down. There’s lots of good news.”

Beck seemed baffled by this response. He laughed and said “I don’t understand what this is. Your question is ‘Is America in decline?'”

“I’m not so sure it is,” Stossel replied. “We are financially going broke, but in other ways, we are doing well.”

Amen. My two cents: the Right’s own Chicken Littles like Beck have a knack for fear-mongering about impending doom but, by and large, things are getting better. The small-government would be better served not to use fear as the primary motivation for limiting the growth of government.

View the segment below, via Fox Business Network: