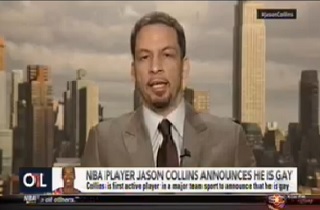 Not everyone is celebrating the coming-out of the NBA’s first NB-Gay, which sort of validates Jason Collins‘ decision to lead professional sports into the 21st century. On Monday’s Outside The Lines, ESPN reporter Chris Broussard opined that Collins was “walking in open rebellion to God and to Jesus Christ,” and therefore “would not characterize that person as a Christian.”

Broussard later tweeted a clarification, in which he said Collins “displayed bravery,” and generously allowed that Collins should be allowed to remain in the NBA, but was silent on the issue of eternal damnation.

Broussard’s initial comments were made during a debate segment with L.Z. Granderson, whom I just found out is gay. Broussard responded to L.Z.’s profession of Christian faith by telling him that “Personally, I don’t believe that you can live an openly homosexual lifestyle, or an openly, like premarital sex between heterosexuals. If you’re openly living that type of lifestyle, then the Bible says you will know them by their fruits. It says that, you know, that’s a sin. If you’re openly living in unrepentant sin, whatever it may be, not just homosexuality, whatever it maybe, I believe that’s walking in open rebellion to God, and to Jesus Christ.”

As I’ve said many times before, everyone is entitled to their own personal beliefs, and if Broussard had stopped there, he would only have been guilty of ignorance of his own religious text. The verse he’s quoting refers to false prophets, not gays and fornicators, and predicts that they will be “hewn down, and cast into the fire.”

But at the beginning of that same chapter, Broussard is advised to “Judge not, that ye be not judged. For with what judgment ye judge, ye shall be judged: and with what measure ye mete, it shall be measured to you again.”

Granderson responded by pointing out that faith is personal, and that he didn’t “need Chris to tell me I’m a Christian,” but also revealed the Catch 22 that folks like Broussard inflict on gay people. “I’d love not to have premarital sex,” L.Z. said, “but in this country, I’m not allowed to get married. So I do what a brother needs to do.”

He went on to explain that “We can’t say, on one hand, from a spiritual perspective, that the Bible says x, y., and z, and then set up a federal government system in which you further ostracize a collection of people, and label them as sinners… To say ‘you’re having premarital sex, and oh, by the way you are not allowed to get married.'”

Anti-gay Christians consistently try to paint themselves as victims because people call them bigots, but they just as consistently miss the point that nobody cares what they personally believe. The bigotry is in trying to enforce their beliefs on others, either by legislating against their rights, or lobbying for a place in Hell for them. It’s a point that Broussard missed when he tweeted this clarification:

Today on OTL, as part of a larger, wide-ranging discussion on today’s news, I offered my personal opinion as it relates to Christianity, a point of view that I have expressed publicly before. I realize that some people disagree with my opinion and I accept and respect that. As has been the case in the past, my beliefs have not and will not impact my ability to report on the NBA. I believe Jason Collins displayed bravery with his announcement today and I have no objection to him or anyone else playing in the NBA.

Mr. Broussard, if you don’t believe in gay sex, or marriage, you don’t have to get gay married, or gay sexed. The result will be that you either do, or don’t, get to Heaven, at which point you might find out where Jason Collins gets to spend his earthly life’s post-season. Until then, and even thereafter, think of Jason Collins’ soul like a Doritos™ marketing presentation: it’s nacho business.