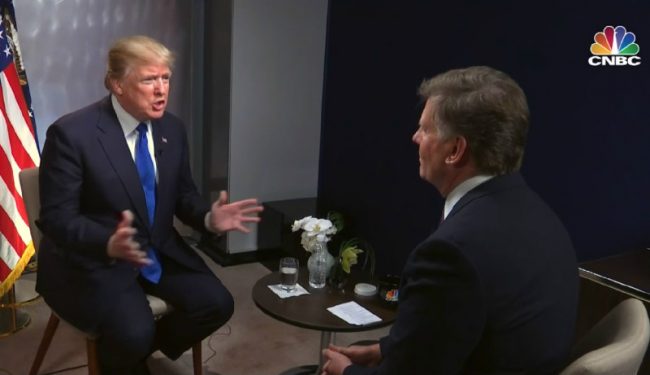 During President Donald Trump’s trip to the World Economic Forum in Davos, CNBC scored a major get when Squawk Box’s Joe Kernen nabbed an interview with POTUS. One would think that a cable business channel scoring an exclusive interview with the leader of the free world would give it a solid ratings win over its competitor.

Well, you’d be wrong in this instance.

According to Nielsen, Friday’s broadcast of Squawk Box featuring the Trump interview only pulled in 136,000 total viewers. In comparison, Fox Business Network’s Mornings with Maria drew 149,000 overall viewers. Squawk Box did lead in the 25-54 demo for the day, capturing 34,000 viewers in the metric compared to Maria Bartiromo’s 18,000.

The interview represented the first American television interview Trump has given to a non-Fox, non-Christian broadcasting or non-Sinclair outlet in a very long time. So why wasn’t CNBC able to capitalize on this rare event? Why couldn’t they get anyone to click over in large numbers?

Maybe it was because the interview was boring. Kernen, perhaps wanting to maintain a friendly relationship with the man who for years appeared weekly on Squawk Box, tossed nothing but softballs Trump’s way. The interview didn’t produce anything notable and didn’t drive any news cycles.

Meanwhile, in contrast, another Davos interview POTUS gave to a Trump-friendly host — British journalist and former Celebrity Apprentice winner Piers Morgan — was chockful of juicy bits, even as Morgan continued to display his affinity for the president.

With much of the business world paying attention to Davos last week, FBN posted solid wins over CNBC ratings-wise. During the business day, Fox Business averaged 277,000 total viewers compared to CNBC’s 198,000. The two networks were neck-and-neck in the 25-54 demographic, with CNBC pulling snagging an audience of 34,000 compared to FBN’s 32,000.

CNBC is coming off of a down 2017 as Fox Business overtook it for the first time in ratings. While most of cable news saw decent to record numbers due to the Age of Trump, CNBC experienced a 22-year low in total viewers during the business day.

UPDATE 4:48 PM ET: Back in 2015, CNBC announced it was no longer going to rely on Nielsen for its daytime ratings, as the network felt the firm wasn’t doing a good enough job properly counting the channel’s out-of-home viewership. The thought behind that move is that most people who watch CNBC during the business day aren’t at home.