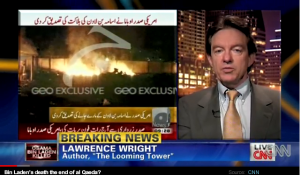 In The Arena host Eliot Spitzer spoke with The Looming Towers: Al Qaeda and the Road to 9/11 author Lawrence Wright and with former CIA Islamabad station chief Robert Grenier about what the capture and death of Osama bin Laden means for al Qaeda.

Wright shared his thoughts, pointing to Ayman al-Zawahiri as a likely, if not terribly effective, leader:

Well, al Qaeda could not end without [bin Laden] being killed or captured. So at least we’ve gotten that far. Certainly the organization will endure, at least for a while. Ayman al-Zawahiri, the number-two guy, will take over. He’s proven to be a terrible manager. His own terror group in Egypt, al- Jihad, he ran into the ground.

He’s not charismatic. He’s anti-charismatic. There’ll probably be a struggle for succession within al Qaeda. There will be tremendous centrifugal forces on the al Qaeda affiliates such as the — al Qaeda and the Islamic Maghreb and so on, that are really basically nationalist in their goals, not internationalist in the way that bin Laden had been.

Without bin Laden as a figure head and an inspirational figure, those affiliates may likely break off and begin to follow their more natural pursuits.

Grenier, meanwhile, adds that he believes that, while there may be a slight spike in sympathy for bin Laden in the wake of his death, it will be increasingly difficult to al Qaeda to recruit new members, noting that even some religious extremists have openly rejected bin Laden’s views:

But fundamentally, his support within the region has gone way down. And most importantly, essentially he and his organization have been left behind. What’s most significant about this is that they’re not even part of the conversation. It’s not as though those who are responsible for the Arab spring have rejected bin Laden. They’re not even thinking about bin Laden or al Qaeda.

Take a look at the full segment, courtesy of CNN: