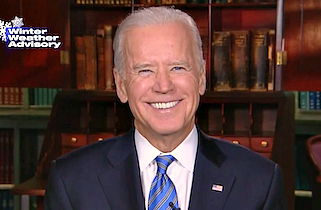 It’s officially time for Joe Biden to jump into the race for the 2016 Democratic nomination if today’s Quinnipiac poll is any indication.

Said poll also shows Biden doing better against Republican competition in key states: As noted above, the Vice President leads GOP frontrunner Donald Trump by 10 points in Ohio (doubling Clinton’s lead). In Pennsylvania, Biden beats Trump by 8 points, while Clinton is only up 5…and this is before he’s even announced yet.

John Kasich tops all Republican contenders–including Trump–in Ohio (if he doesn’t get the nomination, he has to be top choice for VP given that factor).

Marco Rubio leads Hillary by seven points in Pennsylvania and Biden by only three.

Former RNC Chariman Michael Steele stated on MSNBC this week that we’re in for the most entertaining period of political theatre we’ll ever see over the next few months. He also declared the eventual nominees will be Trump and Bernie. He’s certainly correct on the first prediction, time will tell on the second…but could you even imagine what that general campaign season will look and sound like?

And if not Bernie, Biden appears to be able to jump in this “late” without missing a beat in the states that count. That’s how soft Hillary’s support is right now as she bumbles through another horrific week. And if not Biden, perhaps this guy could be the Democrats answer to Trump as noted in this space earlier this week.

He’s run twice before. And you know what they say about third times and charms.