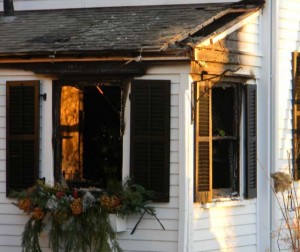 The call reporting a structure fire at the residence came through at about 2:30 p.m.

A reporter on the scene said the fire was in the rear of the two-story white house and appeared to be contained at about 4 p.m.

At 4 p.m. the investigation team including a fire marshal and firefighters were inside the house investigating the damage. No one was injured, according to police officials at the scene.

Another report, from the Register Citizen, notes that no one was home at the time of the fire, and describes the extent of the damage:

The house is a white two-story Colonial-style house with black shutters that sits on the corner of Lucas Road and Sharon Mountain Road.

Water from a nearby brook, as well as water from an in-ground pool on the property was used to extinguish the fire. Tanker trucks from area towns were also called for assistance.

Fire departments and companies from Sharon, Warren, Kent Cornwall, Lakeville as well as Amenia and Wassaic, N.Y., responded to the scene, along with state police. Sharon Ambulance volunteers also responded to the scene to provide water and medical assistance to firefighters. Additional firefighters were order to stand-by for assistance. Millerton N.Y was in Sharon’s quarters; Canaan was in Lakeville’s quarters and Goshen was in Cornwall’s quarters.

According to Sharon fire marshal Stan MacMillan, the fire was in the northwest corner of the first floor of the house and appeared to be contained at about 4 p.m.

The fire was primarily in the office in the rear of the structure, although smoke damage was reported throughout the house.

Tonight, Ross has sent thanks to local firefighters for their work keeping the damage at his home to a minimum: 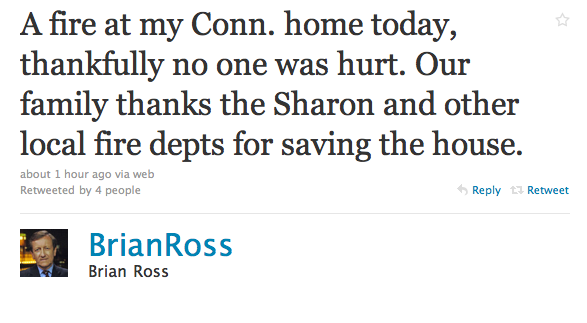 Ross says the damage was confined largely to his home office, where he appears occasionally during breaking news shots on weekends, and where he recently wrote his book on Bernie Madoff.