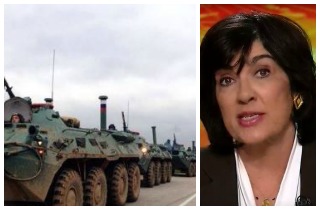 “Some are concerned we might be on the eve of another Cold War,” Blitzer fretted. “What, if anything, would stop Vladimir Putin from getting involved?”

“There doesn’t seem to be any notion that he is actually going to do so,” Amanpour insisted.

“The U.S. right now says it only sees Russia’s military exercises ‘within the normal range,’” she continued. “It does not see any of the kind of massive planning that Russia would have to do in terms of planning, and logistics, and securing air, and land, and rail, and road corridors to incur into Ukraine.”

She noted that a 1990s-era treaty signed by both Russia and Western nations guarantees Ukraine’s territorial integrity. “A lot of intensive diplomacy taking place along those lines to try to make sure it remains stable and this crisis doesn’t spill out of control,” she concluded.

Reports indicated that Russian paramilitary forces under Moscow’s control occupied airports in the autonomous Ukrainian Republic of Crimea overnight on Friday, less than 12 hours after Amanpour made this declaration. This preliminary occupation turned out to be a prelude to Russian forces exploding out of the Russian naval base at Sevastopol and taking control of the regional capital just 80 kilometers to the Northeast.

Several hours later, the Agance France-Presse confirmed an earlier report in Pravda which revealed that 2,000 Russian armed forces had been airlifted into a regional airport in Crimea.