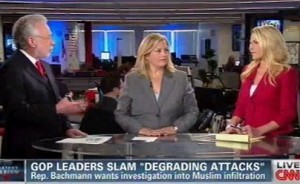 Congresswoman Michele Bachmann has gotten a lot of feedback over a letter she sent suggesting State Department official Huma Abedin has strong ties to the Muslim Brotherhood. Ed Rollins, her former campaign manager, condemned her in a FoxNews.com post, acknowledging that Bachmann “sometimes has difficulty with her facts.” On CNN today, former Bachmann spokesperson Alice Stewart did not react as strongly to her former boss’ remarks, but did say they were “unfortunate.”

Wolf Blitzer asked Stewart if she thought Bachmann went too far with her insinuation. Stewart said she’s never personally met Abedin, but agreed with the criticism that she didn’t deserve to be singled out.

“I do feel like that she should not have been singled out in an attempt to draw attention to, and shine a spotlight on, the possibility of Muslim Brotherhood influence on the Obama administration. It’s not necessary to call out someone of her character and her good will and good nature, and I just think that was an unfortunate thing to do.”

Blitzer went further, saying it was a “terrible” thing to say, and he brought up Rollins’ post from yesterday. Hilary Rosen agreed with Rollins in calling for Bachmann to directly apologize to Abedin, but also dismissed the idea that the Muslim Brotherhood has any serious influence on the Obama administration is “ridiculous.” She called Hillary Clinton “the most pro-Israel secretary of state we have seen in a generation.”

Stewart wouldn’t say whether Bachmann should personally call Abedin to apologize, telling Blitzer, “I’m not working for her anymore, that’s her decision to make.” Blitzer said he invited Bachmann onto CNN, to which Rosen said that the congresswoman is “irrelevant” and the fact that her statements get just widespread national attention “is just wrong.”