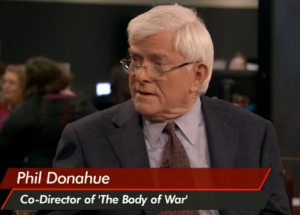 In the run-up to the Iraq War, there were very few voices in the media who were openly opposed to it, even on MSNBC. One of the loudest critics at the time was Phil Donahue, and despite the fact that his MSNBC show Donahue did well compared to other MSNBC shows at the time, it was cancelled less than a year after it began. With the war’s 10th anniversary upon us this week, Donahue sat down with HuffPostLive to talk about his firing and time at the network, as well as making some interesting comments about Chris Matthews. Donahue said his popularity at the network was a personal threat to Matthews, who he described as “emotionally upset.”

RELATED: Chris Matthews Shut Down Amid Anti-Birtherism Tirade: ‘The Only Person Talking About That Is You’

Marc Lamont Hill played a clip of Donahue and Matthews back in 2002, in which Matthews berates Donahue for always being so negative and pessimistic about the United States. After briefly dissecting how people like Matthews at the time were unfairly equating patriotic dissent with hating the U.S., Donahue divulged some information about his former colleague. He said that Matthews “wanted to be the face of the network” and noted how he was quoted in a magazine as predicting Donahue would be MSNBC’s downfall.

Donahue shared his theory on why Matthews disliked him so much.

“I think he saw me as a threat to his supremacy. He wanted to be the face of MSNBC, and here comes this talk show host… I think I was a threat to his goal of being the man of MSNBC. And he was quite emotional. He was emotionally upset.”

Watch the video below, courtesy of The Huffington Post: