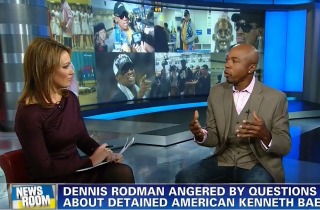 Former NBA star Greg Anthony appeared on CNN on Tuesday to discuss an explosive interview between Dennis Rodman and CNN anchor Chris Cuomo on the subject of the eccentric basketball player’s frequent trips to North Korea. In an effort to defend Rodman’s decision to travel to the secretive state accused of running hundreds to massive prison camps, Anthony insisted that people should not be scolded for visiting America even though the government continues to operate the Guantanamo Bay facility.

Anthony opened the interview by saying that he would not have traveled to North Korea, but he said that he understands the need to participate in cultural exchanges. “I don’t think these guys are ambassadors or diplomats and should be ridiculed for something that’s happened in the past,” Anthony insisted.

“It’s just that we look at what Dennis Rodman has done and we know what’s happening in North Korea,” CNN anchor Brooke Baldwin began.

“Well, we know what’s happening in America, don’t we?” Anthony interjected. “People come to America all the time and Guantanamo Bay is still open.”

The number of people estimated to be occupying North Korea’s expanding prison network ranges from 100,000 to 200,000 per camp. One such camp, labeled Camp 16 by North Korea watchers, was estimated to be as large as 216 square miles as of 2011.