Former Obama Adviser Rebuts Attack Ad On Romney: ‘Bain Did Nothing To Be Embarrassed About’
video

Former Obama Adviser Rebuts Attack Ad On Romney: ‘Bain Did Nothing To Be Embarrassed About’ 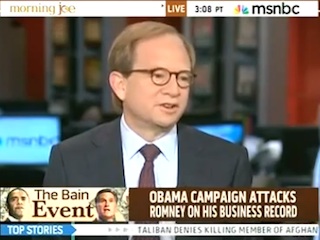 Appearing on MSNBC’s Morning Joe on Monday, former Obama adviser Steve Rattner criticized the new anti-Romney ad put out by the Obama campaign that claims Romney was a “job destroyer.” “Were you embarrassed by this?” host Joe Scarborough asked.

RELATED: Obama Ad Blasts Romney: He Was A ‘Job Destroyer’

“I think the ad is unfair,” Rattner acknowledged. “Look, Mitt Romney made a mistake ever talking about the fact that he created 100,000 jobs. Bain Capital’s responsibility was not to create 100,000 jobs or some other number. It was to create profits for its investors, most of whom were pension funds and endowments and foundations. And it did it superbly well, acting within the rules, acting very responsibly, and was a leading firm. And so yeah, I do think to pick out an example of somebody who lost their job, unfortunately, this is part of capitalism, this is part of life, and I don’t think Bain Capital did anything they need to be embarrassed about.”

Scarborough was incredulous over the ad’s message that Romney was a “job destroyer.”

“…You hurt for the guys being filmed there, but they are being used in a commercial that — it’s demagogic to suggest Mitt Romney created unemployment? You know, you do anything for as long as he worked at Bain Capital, there’s going to be some successes and some failures. Here, Americans won’t buy that nonsense.”

“This is politics,” Willie Geist noted.

Watch the ad below via MSNBC: