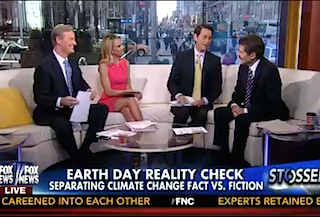 Next Tuesday marks the 44th annual Earth Day and as a little preview Thursday morning, Fox & Friends invited Fox Business anchor John Stossel on the program to explain why he’s going to spend the day promoting fossil fuels, which are one of the leading contributors to man-made climate change.

“I do cheer for fossil fuels because that’s the only way that poor people — and there are billions still in poverty — can lift themselves out of poverty. The other stuff isn’t good enough,” Stossel told the Fox hosts before laughing about the headline writers who think “we’re all going to die” because of the changing climate.

On the other hand, Stossel did say government was right to step in back in the 1970s and help clean up the air and the water, but added, “they should have then said, ‘stick a fork in it, it’s done’ instead of ‘give us more control.'”

As evidence that humans are not causing the earth to get warmer, host Steve Doocy decided not to cite last month’s ominous report from the Intergovernmental Panel on Climate Change but instead self-described Greenpeace co-founder turned climate change skeptic Patrick Moore. “The world is getting warmer, but there is no evidence that man is connected to the global warming,” he said.

From there, Stossel proceeded to give the hosts a true-or-false quiz on the effects of climate change without giving any sources for his definitive, red-stamped answers. “Global warming may be a problem,” he concluded, “but we don’t know.”

“Is it a product?” Elisabeth Hasselbeck asked Stossel. “Is it something that’s being sold to the American people, sold when scientists do their research?”

“I guess you could think of it that way,” Stossel agreed. “It’s sort of a movement. It’s a give-government-more-power movement, and let us manage your life.”