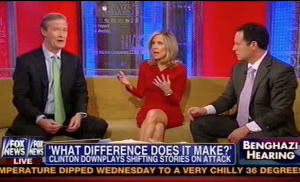 The Fox & Friends crew was not satisfied with Secretary of State Hillary Clinton‘s hearings before the Senate and House — particularly the much-discussed “what…difference does it make?” remark. Noting the lack of justice, the co-hosts were wary of both Clinton’s answers as well as the committees’ questions.

Clinton’s point was to get justice, Alisyn Camerota contended — but then “where is the justice? Why hasn’t anybody been prosecuted?” There were too many unanswered questions, she said.

“This is the Lance Armstrong principle of when you’re in trouble yell at the person asking the questions,” Brian Kilmeade remarked. “That’s what I thought of right away, because when she gets angry, you do not want to be in her crosshairs.”

And about that “what difference” comment? That’s the “whole reason why we’re there,” he said. “Her words absolutely defy the logic behind the whole reason for the hearing.”

Yet Congress didn’t “drill down” on the questions, Camerota said. ” A lot of people have said there was a lot of just them on a soapbox instead of just asking her point-blank, making their questions succinct.”

Steve Doocy hit Clinton on a different point: her argument that Congress is acting as an obstacle in regards to funding. Over the last several years, the funding has increased, he said. And the recent decrease can be attributed to the drawdown in Iraq. But: “Did she ever say, You guys are short-shifting me, I need more money for embassy security’? No.”