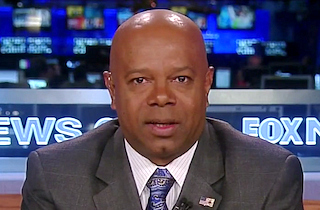 On Fox News Monday morning, conservative radio host David Webb strongly criticized Senate Republicans for failing to stand with Senator Ted Cruz (R-TX) and House Republicans in the fight against Obamacare, and recommended voters reconsider the members they elect to represent them.

“We have a Senate for basically decades now has been the president’s club,” Webb said. “100 bureaucratic oligarchs who don’t reflect American people’s will. And a GOP Senate, who, frankly, in large part doesn’t know how to fight. Sometimes you fight and you lose. But you leave your base, you leave the American people with the impression and the truth that you will fight for them. This is marathon, not a sprint.”

“If you say the Senate is about the president, that’s a slap in the face to American voters,” radio host Leslie Marshall replied. “The American voters, both Democrat and Republican, elected those officials in both House and Senate.”

“Frankly, I would tell the American voters you need to consider why you put people in office, regardless of party, for thirty years-plus,” Webb said. “This is ridiculous. We have essentially created, or let be created, a permanent political class that sits inside the Beltway. It’s time we as Americans take a look at our choices and what we’re getting in results. You could argue, left, right, you could argue the polls all you want, but I’m asking the American people: tell me what solution you got out of anything from October 1st, to October 21st today? You got nothing.”