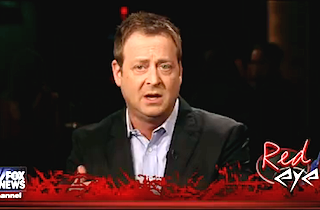 In case you needed proof that the Bowe Bergdahl story is quickly turning into the usual partisan battle, now someone on Fox News is accusing MSNBC of distorting the facts of the case to better fit a preferred narrative. On last night’s Red Eye, Andy Levy called out the rival network’s “bullsh*t” characterization of how conservatives are reacting to the prisoner swap that is bringing Sgt. Bergdahl home.

After host Greg Gutfeld said he can’t believe how “amazed” the Obama administration seems to be over the fact that Bergdahl’s release is not a cause for celebration across the board, Levy said the White House is likely surprised over the negative coverage the deal is getting, and not only from Fox News.

“But I think the administration maybe thought that they would be able paint that narrative with the help of people on MSNBC and ThinkProgress and whatever,” Levy continued. But now that Bergdahl’s platoon-mates have been speaking out loudly against him and calling him a “deserter,” he said they “won’t be able to get away with that.”

From there, Gutfeld suggested that perhaps the Obama administration has a different idea from the military of what “desertion” really means. “To the administration, it’s like calling in sick for work when you are not really sick,” he said. “We’ve all wanted to desert, right?”