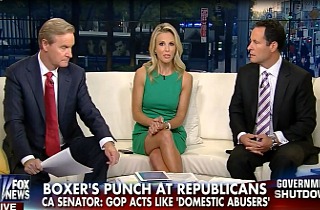 The hosts of Fox & Friends scolded Sen. Barbara Boxer (D-CA) on Tuesday morning after playing a clip of the senator comparing Republicans in Congress to people who engage in domestic abuse. Host Elisabeth Hasselbeck tore into Boxer for her comments and called out the political press for keeping silent on the issue, she says, only because Boxer is a Democrat.

“When you start acting like you’re committing domestic abuse, you’ve got a problem,” Boxer said on the floor of the U.S. Senate. “I love you dear, but, you know, I’m shutting down your entire government. I love you dear, but I’m going to default and you’re going to be weak.”

“You know who should be infuriated? Women who have suffered from domestic abuse,” Hasselbeck said in response to Boxer’s comments. “Millions of women out there who now have their situation trivialized over politics?”

“How dare she minimize the abuse that so many women struggle,” Hasselbeck continued. “The sad thing too is that you’re not hearing this – you’re not hearing any loud screams of offense out there in mainstream media. No one’s talking about it. Why? Because it’s coming from one side of the aisle.”

Steve Doocy noted that the National Organization for Women has not yet weighed in on the matter, though it would seem as though this is the kind of issue on which they should make their position known.

“It’s hard to get stuff done when each side is calling each other names,” Doocy observed.