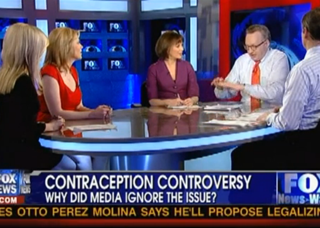 Garnering by far the most press attention this week this side of an actual election, the debate surrounding President Obama’s birth control mandate opened this week’s episode of Fox News Watch, with the panel looking more at the way the media approached the issue than how they would spin the news that President Obama reached a compromise with religious leaders. The panel seemed to agree that the left-wing media had decided to make the debate between Planned Parenthood and the Komen Foundation a bigger issue than the contraceptive issue with the White House, but had to make it a story because of the pushback.

Monica Crowley began by citing statistics that the television news outlets slept on the issue, according to the Media Research Center, for sixteen days before Fox News and talk radio began to talk about the mandate to provide birth control. “It actually forced the White House to change their tactic on this,” she argued. While Kirsten Powers agreed, but added that she did not think the pressure was exclusively from the right but from “liberal Catholics… and people who support Obama on pretty much everything saying this was not okay.”

While the panel mostly agreed that it was an issue of religious freedom, Judith Miller argued that it was an issue of medical access for women, and that the President’s compromise was a fair one “for which he should be given credit because it satisfies a lot of different constituencies.” They then went back to discussing the media coverage, for which Powers argued that the left-of-center media “are united in believing that Planned Parenthood is a humanitarian organization that no one can ever criticize or question,” and that it makes the issue with Komen a top story before the birth control mandate despite the fact that “there is nothing in the Constitution about access to contraception.” Jim Pinkerton chimed in to conclude, then, that while one can argue about the ways that the conflict played out and the various positions, “you can’t argue that there was a conflict,” while “the media ignored that outrage.”