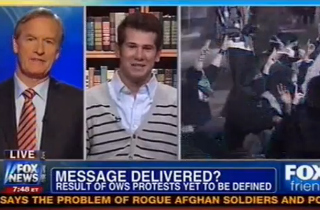 On Monday’s one-year anniversary of the Occupy Wall Street movement, Fox & Friends host Steve Doocy compared the Occupy movement’s protests to last week’s violent attacks on the American consulate in Libya that resulted in the deaths of four Americans including Ambassador Christopher Stevens.

For a segment exploring why the Occupy movement may be in “disarray,” Doocy was joined by self-described conservative “comedian” Steven Crowder, who said “the movement is entirely based on selfish motives.”

“The tea party,” Crowder continued, “is inextricably tied to conservatism. It’s attached to an -ism. The -ism of life, freedom, pursuit of happiness, constitutionally-limited government. The Occupy movement is based on wanting more free crap. It’s like herding cats, and that’s why you see the biggest mark the Occupy movement has made, Steve, really over the last year has been a mark of crime.”

“Sure,” Doocy agreed before adding:

“We’re looking at some of the video next to our faces right now and that almost looks like what happened last week in Libya and in Cairo. And we’re talking about the Occupy forces moving out — in the last year, 7,000 arrests in 119 different cities.”

Crowder then explained that “the tea party leveraged their ideology into political influence of keeping conservative candidates accountable to the platform they publicly professed,” but according to him, “Occupiers were able to do none of that because — Steve, say it with me — they just want more free crap. We’ll make it a sing-song for them. They can follow the dancing crack pipe.”