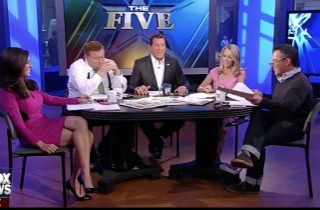 Rarely do you get Fox News hosts agreeing with Bill Maher, but Maher’s frequent criticisms of the Muslim religion do sound a lot like what many Fox hosts have said. This week Maher didn’t just bash Islam, but he technically defended Christianity by saying no matter how radical you might think some Christians are, unlike in the Islamic faith, a significant number of them don’t believe in death for drawing a picture of Jesus or stoning women or adulterers.

Greg Gutfeld credited Maher for being consistently vocal about how backwards radical Islam is. Bob Beckel said that Islam just gives people an excuse to “hate.” In contrast, Dana Perino said Christianity is all about forgiveness, grace, and being non-judgmental.

RELATED: The Five Thinks Bill Maher’s Finally ‘Got It Right This Time’

Andrea Tantaros, meanwhile, noticed that Maher is far more critical than the White House has been of radical Islam. In that Charlie Rose appearance earlier this week, Maher said it’s ridiculous to downplay the “Islamic” part of ISIS… which is pretty much what Obama did in his ISIS speech this week.

Eric Bolling pointed out that there’s over a billion Muslims in the world, and even if only one percent of them want to kill all the infidels, that still leaves tens of millions of potential threats out there.

And you can watch Maher’s comments here, via PBS: