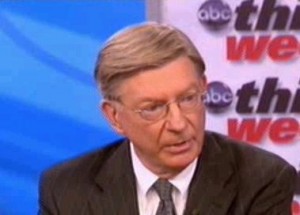 Now that Herman Cain is out of the Republican presidential race, we have officially kicked off the phase where everyone reflects on the ups and downs of his campaign. And on This Week today, George Will wasted no time in calling the ex-candidate “disrespectful” and a “charlatan” for using his candidacy to promote his book and not be a serious candidate bringing ideas to the table like everyone else.

Christiane Amanpour asked the panel if Rick Santorum had the best chance of getting more support in Iowa, particularly from Cain supporters. Will argued there was indeed room in the GOP race for a “dark horse” like Santorum who’s been heavily involved in policy over the past few years to rise in the polls, but he was more concerned with the American political primary system and how it’s been hijacked by “charlatans, entrepreneurs, and entrepreneurial charlatans.” Amanpour asked if Will was specifically referring to Cain. Will stated he was.

“Mr. Cain, who used this as a book tour, in a fundamentally disrespectful approach to the selection of presidents.”

Will brought up another high-profile conservative celebrity, Donald Trump, and he clearly did not think highly of the Donald hosting a debate, saying it’s time for the candidates to “do something presidential, stand up and say, ‘we’re not going to be hijacked and participate in this.'” Arianna Huffington agreed, joking that Herman Cain might as well get his own reality show, given how much the rest of the presidential campaign has felt like one already.