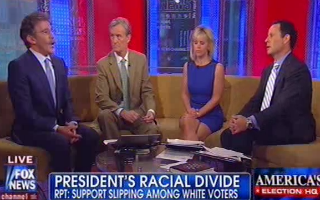 Geraldo Rivera appeared on Fox & Friends on Friday where he lamented the racial divide that haunts American politics as the presidential election cycle heats up. “You have all the black and brown people on the one side, all the white people on the other side – sadly, politics in America is becoming increasingly about race and ethnicity,” said Rivera.

In the segment, co-host Brian Kilmeade noted that African Americans have traditionally voted Democrat and that is unlikely to change this year. Kilmeade noted, however, that polls are showing the President’s standing among black voters is slipping.

“A poll came out recently that showed he lost 10 percent approval within the African American community,” said Kilmeade.

“I think he’ll still get north of 95 percent in the African American community,” said River. “He’ll also get two thirds of the Hispanic community.”

“On the other hand, his approval among white voters has dropped,” said Rivera. “He’s only getting 39 percent of white people intending to vote for the President. So, if you have all the black and brown people on the one side, all the white people on the other side – sadly, politics in America is becoming increasingly about race and ethnicity.”

“People hate when I talk about that, but that’s a reality,” Geraldo concluded.

When the Fox hosts noted that African American unemployment was well above the national average, at 14 percent, and asked if that would move a few black voters to stay home or vote Republican, Rivera shrugged the notion aside.

“There is no way that the African American community is going to vote for Mitt Romney,” said Rivera.

“It will be historic support – it might be north of 95 percent,” Rivera said of African Americans supporting President Barack Obama’s bid for a second term. “On the other hand, his vote among white people could be historically low for a candidate.”

Rivera said that the prospects for the United States are “devastating” if the nation votes along racial lines. “I don’t like the way this race is shaping up – I want them to stick to the issues.”

Rivera hit Romney’s campaign for not focusing on enough specific details and purely blaming the Obama White House for the state of the economy.