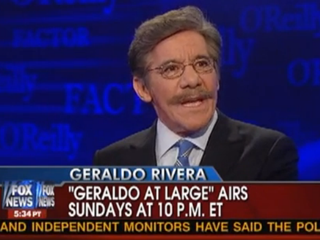 The news cycle took a very sharp turn this week as the focus of national attention shifted from Rush Limbaugh to a video of President Obama in his college days praising and hugging Harvard Law Professor Derrick Bell. On last night’s O’Reilly Factor, Geraldo Rivera finally weighed in, making the case to Bill O’Reilly that the tape is not a huge deal for two main reasons: it was unfair to “try to make Derrick Bell’s shoes fit Barack Obama,” and making Bell out to be a radical in the first place was a shaky argument.

“I don’t think it’s a very significant deal,” Rivera told O’Reilly, asking him what the strange facet to the story was when stripped down to “the black president of the law review hugs a black law professor protesting a lack of diversity.” O’Reilly noted Bell was “a pretty radical guy,” to which Rivera countered that “he’s not Jeremiah Wright” but had to make the argument after O’Reilly played clips of some of Bell’s most radical statements– among them, that he thought well of Louis Farrakhan and “I live to harass white people.” Rivera argued the comments were “interesting, but irrelevant” and, to him, he seemed “definitely anti-racism,” but not necessarily anti-white.

O’Reilly argued that there were elements of his argument that were troublesome in his eyes, namely that “it was always white racism oppressing white people” that Bell opposed, and not all racism. What’s more, O’Reilly continued, the President associating with Bell made a pattern, given his relationship with Wright. “What President Obama did was support Bell’s crusade to get more minority women professors tenured at Harvard,” he noted, which seemed to O’Reilly one piece to a larger puzzle.

“I don’t know who you hung around with at Harvard,” Rivera began to tease– before O’Reilly cut him off with “nobody!”– “but you should’ve seen me back in the day!” Rivera noted that universities lended themselves to that sort of interaction and “to try to make Derrick Bell’s shoes fit Barack Obama is extremely unfair” and “a sign of desperation.” O’Reilly agreed only with the point that the video seemed not to be “getting much traction” as far as polling indicates.