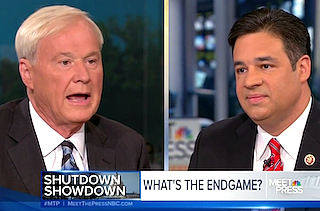 “Your boss, Tip O’Neill, shut down the government twelve times and you didn’t call him a terrorist,” Labrador said.

“These were always issues of a couple of days, and they were always resolved, and they were on both sides,” Matthews responded. “There were issues of a day or two, and issues of funding. You can argue over numbers, if it is seven or nine, you can say, make it eight. But when you say we’re going to get rid of the number one program you put into law and that put you in the history books, that your party has been fighting for for half a century, you can’t say give me that. That’s a non-negotiable demand.”

Labrador admitted the government shutdown would be blamed on Republicans, and accused the Democrats of wanting it for that very reason.

“The Democrats think this is a loser for us, everybody agrees this is a loser for us if the government shuts down, that is why I think the president wants a government shutdown,” Labrador said. “If you looked last night at Twitter, there was not a single Republican on Twitter that said let’s shut down the government, but every single Democrat was saying the Republicans want to shut down the government. The politics are coming from the other side as well. So let’s be really honest about this. The other side would like to see Republicans in trouble in 2014. They’re not even willing to meet us half way. Harry Reid will not negotiate with John Boehner, the president will not meet with John Boehner, and John Boehner is actually trying to be responsible here.”

“The Speaker of the House is actually not interested in trying to filet up ObamaCare right now, as you are,” Gregory said.

“He wanted to do it in the debt ceiling, and I just disagreed with him, I thought that this was the moment to do it,” Labrador said.