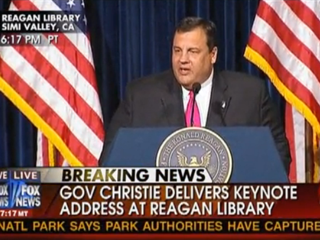 New Jersey governor Chris Christie finally broke his silence since rumors of a presidential run returned out of nowhere this weekend, speaking at the Reagan Library in California. Making the core of his speech the virtues of “leadership and compromise,” Christie delivered a speech demanding President Obama accomplish more, because “his failure is our failure, too.” It is not a garden variety gubernatorial speech, but it’s not exactly a campaign speech– striking square in Sarah Palin Iowa territory. His answer to the question? Christie directed everyone to a Politico compilation of him saying “no” repeatedly.

While his speech focused on the legacy of President Ronald Reagan— given it was at his library to which he was invited and his widow which he walked up to her aisle– he took a few moments to expound on his own ideas. His favorite Ronald Reagan story involved a number of air traffic controllers going on strike and summarily being fired– “not as a parable of labor relations but as a parable of principle.” He expounded extensively on American exceptionalism and how being tough at home was the only way to be tough abroad, because “principle would not stop at water’s edge.” To Christie, it was clear this was an idea President Obama had ignored:

All this should and does have meaning for us today. The image of the United States around the world is not what it was, it is not what it can be and it is not what it needs to be. This country pays a price whenever our economy fails to deliver rising living standards to our citizens–which is exactly what has been the case for years now.

We pay a price when our political system cannot come together and agree on the difficult but necessary steps to rein in entitlement spending or reform our tax system.

We pay a price when special interests win out over the collective national interest. We are seeing just this in the partisan divide that has so far made it impossible to reduce our staggering deficits and to create an environment in which there is more job creation than job destruction.

This is where the contrast between what has happened in New Jersey and what is happening in Washington, DC is the most clear.

Christie then went on to explain how New Jersey had, not without significant conflict, passed bills despite having a divided government. To that end, President Obama’s attempt to “cynically convince those who are suffering that the American economic pie is no longer a growing one that can provide more prosperity for all who work hard” was offensive to Christie, who looked back wistfully on the President as he was in 2004.

The full text of his remarks can be found here, and the first part of his speech via Fox News is below.


After his statements, Christie went off-script and took questions from the audience. It didn’t take long for the obvious to come up, and Christie seemed so frustrated at the thought of saying “no” again that he simply directed everyone to Politico, where a convenient video compilation of him dramatically saying he wasn’t running was on the front page. He then warned the reporters against smarty-pants questions, declaring them all New Jerseyans for the night, and warning them: “you give it, you’re getting it back.” He later gave a much more heartfelt explanation of why he is staying out of it, after being implored to run by a lady in the audience. Both answers are below (via C-SPAN):