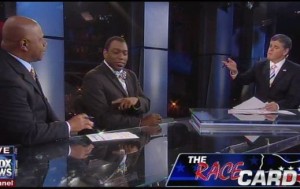 Sean Hannity has a bone to pick with the liberal media, particularly MSNBC: playing the race card when talking about the potential appointment of black Republican Tim Scott to Jim DeMint‘s vacant Senate seat. Hannity played a clip of MSNBC’s Melissa Harris-Perry earlier today talking about Scott’s appointment, with the MSNBC anchor asking her if the South is ready for a black senator. Hannity then ran a montage of MSNBC personalities playing the race card time after time after time to argue a pattern.

RELATED: Black Republican Reverend To MSNBC: Blacks And Latinos Had No Reason To Vote For Obama But His Race

Democratic strategist Basil Smikle admitted it was “uncomfortable” for him to see people playing fast and loose with the race card, especially compared to how carefully people danced around the race issue in 2008. He also pushed back against the attacks on the South, pointing out that a number of southern states actually voted for Obama.

Hannity said there is “real racism” and it is hurting the country, but MSNBC keeps focusing on phony controversies and “playing a dangerous game.” Radio host David Webb said the liberal media and “race pimps” consistently play the race card, and called MSNBC “a disgrace to my profession.” Hannity pointed out George Zimmerman‘s lawsuit against NBC for trying to highlight how the edited 911 call of him made him out to be a racist.

Smikle countered that there has been quite a bit of covertly racist rhetoric thrown Obama’s way, especially in the questions of his legitimacy. Webb criticized Obama for not effectively leading on the issue of race relations in America in the last four years.