Hannity Bashes Jamie Foxx And Bill Maher, Says Liberals Can Get Away With Offensive Rhetoric 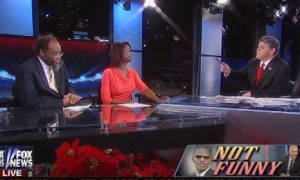 Sean Hannity took on Hollywood hate speech tonight, this time coming from two celebrities whom he particularly emphasized as big supporters of President Obama. Hannity took offense at Jamie Foxx‘s “racially-charged joke” during his SNL routine over the weekend when he said tongue-in-cheek that his character in Django Unchained ends up killing all the white people, and Bill Maher‘s comment that late crooner Andy Williams was a “teabag idiot.”

Hannity said he may just have to accept that liberals can get away with making controversial remarks, while conservatives are held to a higher standard. Deneen Borelli said that such language is now morally acceptable in contemporary culture, and criticized the NAACP “mindset” that only black people who stand in lockstep will be defended.

Michael Meyers acknowledged that Foxx was doing a satire on black stereotypes, as he did when he was on the sketch show In Living Color, but Foxx went “too far” with his jokes about Obama being a “lord and savior.” Hannity brought up the current controversy over Korean artist PSY and how Obama has not condemned his anti-American lyrics from eight years ago. Borelli continued to blame the “Hollywood culture,” also citing the money Obama’s Super PAC received from Maher.

Myers said that Obama is beloved by Hollywood for being “hip” and “cool.” Borelli warned that the president’s embrace of celebrity culture could be “dangerous” for the country.