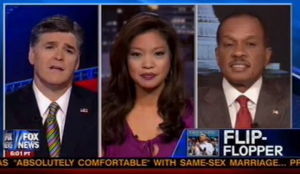 “After years of voicing strong opposition to same-sex marriage,” Sean Hannity said on Wednesday, President Obama “has reversed his position.” And thus the segment was titled “Flip-Flopper.” Hannity delved into Obama’s varying stances on the issue, opening up the discussion to his panel.

“He had multiple positions in a period of time,” Hannity said. “1996 he favored it. 1998 he was undecided. In 2004 he was opposed. 2008, opposed. 2012 now he supports. It sounds like earmarks. Sounds like lobbyist. Sounds like cutting the deficit in half. Sounds like the president can’t make up his mind very well on these things.”

“The country is evolving,” Juan Williams replied, to which Hannity followed up, “I don’t care about the country, what about him?” (Clarifying that he meant the country’s position.)

Williams attributed Obama’s change of heart to “political temperatures,” adding, “I think the whole country has changed, so I don’t see it as anything that is an indictment of him.” Aiming to make a point of Obama’s flip-flopping at large, Hannity played a Crossroads ad that accused him of just that — looking at the issues of earmarks, lobbying, deficit cutting and NASA.

Michelle Malkin remarked, “Every position that Barack Obama takes is an evolutionary composite of dozens of poll-tested or campaign donor-approved positions — and that’s what’s really driving this. It is all about politics and all about money.” Mitt Romney an Etch A Sketch? Obama is a lava lamp, she said, with “all these globs of shapeless, spineless, feckless policies that all sort of heat up and move around when the campaign season heats up.”

She added, “I think more than anything else what the media reaction shows is just what water carriers they are, given the double standards between Mitt Romney’s changing positions and Barack Obama’s ‘historic growth’ on this issue.”

Williams said Obama’s a “political player,” but there’s “no problem” understanding his positions on the issue. Obama, he said, is in a “much better position” than Romney.

Malkin countered, saying if Obama is any toy, he’s Silly Putty, “trying to stretch every position to make everybody happy”: of course he supports gay marriage, but then also says he supports states’ rights.

The panel bickered about what polling says about gay marriage support (polls show support, but 32 states voted on bans), and toward the end, Malkin said, “This is about Barack Obama trying to pander to wealthy, gay donors, period.”