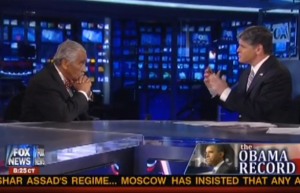 Rep. Charlie Rangel sat down Sean Hannity on Tuesday night to chat about President Obama‘s record thus far — and how that bodes for his re-election campaign. Rangel agreed we need to cut spending, but argued that raising revenue is also part of the solution. This triggered Hannity’s breakdown of how much he pays in taxes, concluding that it’s certainly not less than his “fair share.”

Right off the bat, Hannity and Rangel quipped back and forth about why Rangel hasn’t previously appeared on the show, with each blaming the other for not extending/accepting an invitation.

Getting past that, Hannity stated definitively, “The president’s got problems” — a statement Rangel agreed with. Hannity asked, are we better off now after three-odd years of Obama? We’re a great country in a bad spot, Rangel said, noting the solution is simple: raise revenue, cut spending. To which Hannity responded: raising revenue means raising taxes?

Rangel said it’s a carefully worded question, with Hannity countering it’s a simple one. Nonetheless, Rangel pointed to the loopholes in the tax code. Hannity said 55 percent of what he earns he gives back in taxes (totaling all local, state, federal, property taxes). “Am I overtaxed?” he asked. Not paying his fair share? Hannity said keeping 45 cents to the dollar is far from keeping more than his fair share.

Hannity then pointed to a laundry list of Obama’s unkept promises, asking whether he’s failed. Rangel cited the state of the economy Obama inherited and how Obama saved it. The two clashed on the necessity of bailouts and how Obama’s handled the economy. The answer is not government, Hannity asserted.

The two agreed on the need to cut spending, but Rangel pressed on the additional need to raise revenue and close tax loopholes. Hannity continued to refute that he pays his fair share (doesn’t even have deductions!) — but Rangel said that’s not the case with everyone.