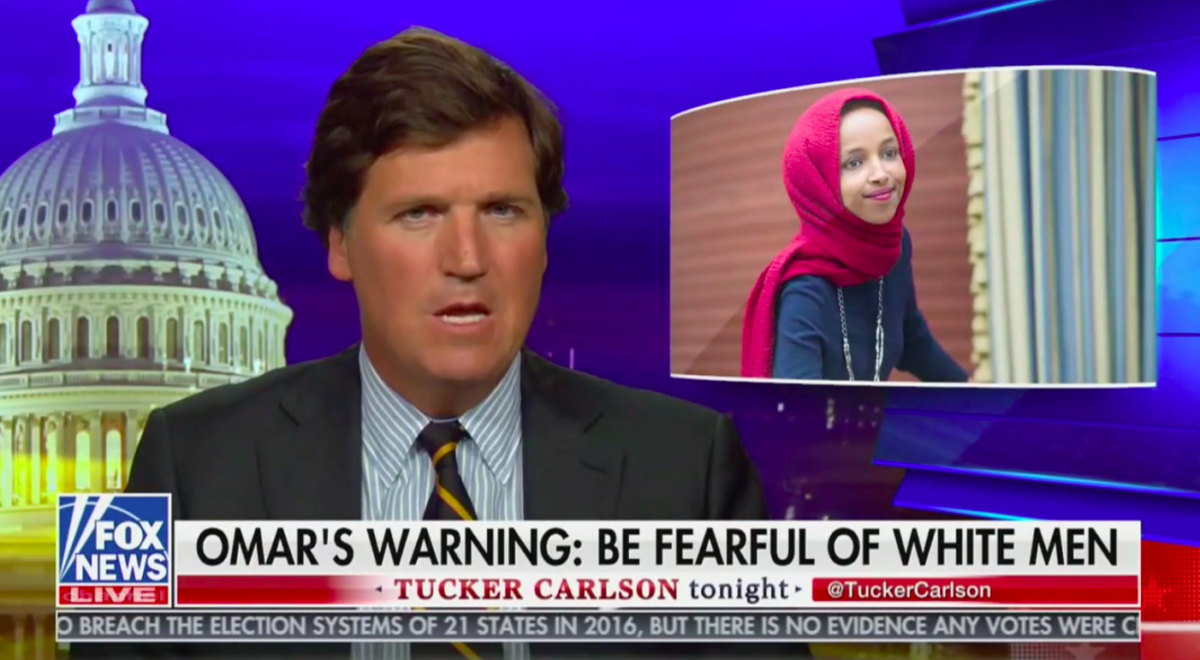 Fox News hosts Tucker Carlson and Sean Hannity ran a clip on Thursday night of Rep. Ilhan Omar (D-MN) supposedly calling for the racial profiling of “white men” in America, but failed to acknowledge the full context of her comments.

The clip, which is from a 2018 Al Jazeera interview with Mehdi Hassan, was originally selectively edited by right-wing Twitter users before going viral online, but the full segment shows Omar was calling out hypocrisy in federal law enforcement for over-monitoring Muslim Americans, even though the majority of terrorist threats and random acts of mass violence in America are carried out by white men today.

“I would say our country should be more fearful of white men across our country because they are actually causing most of the deaths within this country,” Omar can be seen saying in the edited video. “We should be profiling, monitoring, and creating policies to fight the radicalization of white men.”

Frequent Fox News guest Robby Soave even published a Reason Magazine piece on why the clip that has been circulating in the right-wing media-sphere does not show the complete extent of Omar’s comments.

“As the full video makes clear, Omar included a caveat: After she says the line about why the U.S. should be more fearful of white men, she adds, ‘and so if fear was the driving force of policies to keep America safe, Americans safe inside of this country…’ and then she says ‘we should be profiling, monitoring, and creating policies to fight the radicalization of white men,'” Soave wrote.

During Carlson’s primetime show, the host, who has said Omar — who came to the U.S. as a child refugee — is “living proof that the way we practice immigration has become dangerous to this country,” accused the lawmaker of claiming “that if America cared about keepings its citizens, we’d stop worrying about Islamic terrorism — which is really no problem at all — and instead profile white men.”

“Not only is that obviously bigoted, it’s also stupid,” Carlson said. “It’s untrue. FBI statistics prove that it’s actually not factually accurate what she just said but in any case, our real fear should not be ISIS or white men, we should be most afraid of clueless lawmakers like Ilhan Omar.”

Hannity also included the clip during the airing of his show — just before President Donald Trump, who has repeatedly suggested that Omar should “go back” to Africa, appeared on Fox News for a phone interview.

“Omar said that American should be more fearful of white men,” Hannity opined, before adding: “In reality, we should be most fearful of the squad’s radical socialist ideology. It will destroy this country.”

Incidentally, earlier this week, FBI Director Christopher Wray acknowledged that the “majority” of Domestic terrorism in the U.S. today is perpetrated by white supremacists or other right-wing terrorists.

Correction: This post originally stated Hannity and Carlson aired the edited clip circulating on social media. They in fact aired the full clip that included Omar’s caveat. This post has been updated and Mediaite regrets this error.

Watch the clips above, via Fox News.