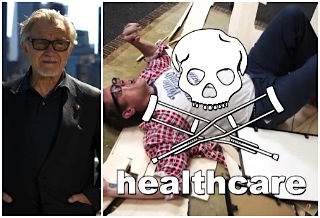 With the official launch of the Affordable Care Act exchanges Tuesday, The Daily Show’s Jason Jones took a look at some of the messaging that both sides are using to either encourage or discourage Americans from signing up. Not quite satisfied with the level of advertising he was seeing out there, he recruited actors Harvey Keitel and Johnny Knoxville to make their own pitches to New Yorkers and young people, respectively.

On one side, Jones met with Anne Filipic of Enroll America who is doing what she can to get millions of Americans signed up for health insurance. On the other was conservative analyst Gina Loudon who believe “Obamacare is bad for America.” Jones had some major trouble taking Loudon seriously, especially when she argued that the private health insurance system has “worked really well for a really long time.”

But things really took off when Jones got a look at the ads each side was putting out leading up to the October 1st launch. After viewing an ad from Enroll America aimed at New Yorkers, Jones said, “You don’t suggest health care in New York, you tell them.” This led to the pitch from Keitel, in which the actor says, “Buy some fucking health insurance, New York… Sign up, you assholes!”

Jones also offered up an alternative to Generation Opportunity’s now-infamous ad, in which a creepy Uncle Sam attempts to give a young woman a pelvic exam. In an alternative attempt to appeal to young (and old) Americans, Jones tapped Knoxville, who brought his Jackass antics to the world of Obamacare.

Knoxville explained that he knows what it’s like to feel “invincible,” but realizes now that everyone should be covered “because you never know when something unexpected” is going to happen. He ended the ad by asking, “Why can’t it be single player coverage? It would be so much easier.”