Carney to Jon Karl: ‘You Can Do an Essay’ on Obama’s Share of Blame for Shutdown 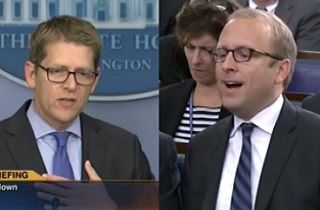 Coverage of the Republican effort to undo Obamacare via government shutdown/default has been characterized by attempts to assign responsibility for the dual crises to both sides. At Tuesday’s White House daily briefing, White House Press Secretary Jay Carney called the objectivity of such attempts into question when he told a persistent Jonathan Karl “You can do an essay” on whether President Obama owns an share of the blame for the current government shutdown.

“Does the President bear any responsibility whatsoever for what’s going on, for this mess?” Karl began.

“Well, I’m not sure what you mean,” Carney replied. “I mean, the President..”

“Does he have any blame for the government shutdown? Any at all?” Karl repeated.

Carney replied, “Look, the President is President of the United States and it is his responsibility to try to work with Congress in a spirit of compromise…”

“And that hasn’t…” Karl began.

“Well, he’s… look, has he or has he not put forward a compromise budget proposal?” Carney asked. “The answer is yes.”

“No, I’m asking if he bears any responsibility,” Karl repeated.

“Jon, he did not… Republicans in Congress chose to shut the government down,” Carney said. “The option to keep it open was available to them. It’s an option that a majority of the House of Representatives supports, a bipartisan majority…”

” But hasn’t the President failed to create an environment where this stuff doesn’t happen?” Karl asked, adding “I mean, I’m asking.”

“No. He’s had multiple meetings and dinners…” Carney began.

“So he’s done nothing wrong in all of this?” Karl asked. “This is all the Republicans’ doing on their own, that the President…”

With impatient amusement, Carney said, “Well, Jon, you can do an essay, or decide for yourself, and make those judgments. What I’m telling you is that this year, the President, in a very public way, reported on by all of you, reached out to Republicans and offered to find common ground on budget issues — and didn’t just talk about it; put…”

“Hold on,” Carney continued,  “put those ideas in a concrete budget, causing a lot of consternation in his own party, because some of the choices he made and some of the decisions he was willing to embrace were not popular among all Democrats, or Democrat support groups. But he was willing to do it because he knew that that’s what it would take to reach a compromise with Republicans who are also willing to compromise. And he had very good conversations with a number of Republican senators and members of Congress. He had Paul Ryan in here at one point during that process.”

“What we haven’t seen, unfortunately, is a commensurate willingness by the Republicans to put on paper a proposal that represents a compromise, that moves off their insistence that — represented by the Ryan budget.,” Carney added. “But the President is open to doing that. He’s open to having those conversations.”

Karl took three more shots at it, before Carney concluded by saying “Jon, the President has tried in serious ways to find compromise with Republicans, and he looks forward to doing it again once the Republicans in the House do the responsible thing and open the government and stop threatening to default on our obligations for the first time in history.”

Carney, a former White House reporter himself, has become increasingly willing to augment his sharper exchanges with these sorts of implicit (or not-so-implicit) media criticisms, criticisms that land harder in the briefing room than out of it.