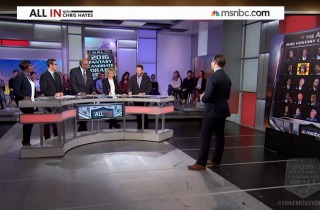 On Thursday evening, MSNBC’s All In w/ Chris Hayes aired a special “2016 Fantasy Candidate Draft” game show episode, wherein five participants each blindly selected five potential candidates off a board and punditized their picks along the way.

Consider this a rare positive review of a cable news show. Not only was the draft fun lots of fun, but it had moments of hilarity (great one-liners for each candidate’s introductory videos), self-deprecation, and sheer watchability. Perhaps CNN’s entry into the game show field — a political Jeopardy-like show airing Presidents Day — won’t be so cringe-worthy after all.

In case you’re interested in following along with the All In fantasy league, which ends Nov. 8, 2016 (or whenever the next President of the United States is officially determined — hanging chads be damned), here’s a full recap with the final teams and how the points work.

Over the next 23 months, the five participants will be award points in the following manner:

After five rounds of blind (read: they didn’t know who they were selecting behind number cards) drafting, analysis, and some candidate-stealing intrigue, here are the final teams:

Watch below in six parts, via MSNBC. It’s well worth it: