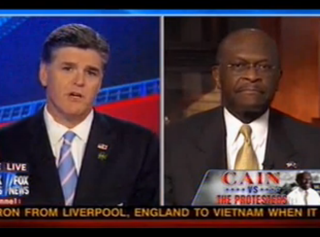 Herman Cain has taken with relish to the position of top tier candidate, launching a thousand rhetorical spears in his direction and answering them in record time. Today, it took only a few hours for him to respond to Cornel West and Harry Belafonte who, respectively, called for him to get off the “symbolic crack pipe” and stop being a “bad apple.” On Hannity tonight, Cain accused West of being “out of touch with the real world” and told Belafonte, “I left the Democratic plantation a long time ago.”

Cain began addressing his harsh comments against the Occupy Wall Street protesters, telling Sean Hannity that “I don’t have a lot of sympathy for people who believe this country owes them something.” As for the race discussions surrounding his rise in the Republican Party, he found it hard to understand people who call “racism on the fact that some people don’t make it in America… if you put your mind to it and you don’t play the victim card, you can do whatever you want. I am walking proof of that.”

RELATED: Cornel West On CNN: Herman Cain Needs To ‘Get Off The Symbolic Crack Pipe’

As for Belafonte and West’s comments, he admitted he found the comments “offensive,” but took them one by one, as they came from difference sources. To West, Cain responded that “this is the difference between someone who has spent their life in academia and someone who has spent their lives in the real world… he is out of touch with the real world.” To Belafonte, he assured him that he was no longer on the “Democratic plantation” and that his only tactic “to intimidate me and shut me up is to call me names and that sort of thing,” and that it wouldn’t work. Ultimately, he argued that both of them– as well as many Democrats– “don’t want a lot of people to wake up, especially black people… they don’t want black people to think for themselves.”