Hex Of An Endorsement: Christine O’Donnell Says Mitt Romney ‘Consistent Since He Changed His Mind’ 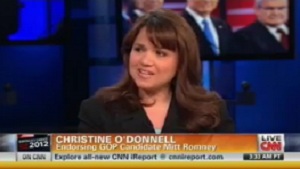 Hours after Mitt Romney‘s presidential campaign announced her endorsement, former witchcraft-dabbler and losing US Senate candidate Christine O’Donnell appeared on CNN’s American Morning to start working her magic on the beleaguered former Massachusetts Governor’s flagging candidacy. While the money quote is that Romney “has been consistent since he changed his mind,” O’Donnell goes on to “help” Romney by telling her fellow Tea Partiers it’s okay to “get behind Michele Bachmann, get behind Rick Santorum, Ron Paul instead of Romney.”

While the knee-jerk reaction to O’Donnell’s endorsement of Romney was mockery, I actually did think her nod might be a little bit helpful with social conservatives and Tea Partiers. Heck, maybe it was helping…until she opened her mouth.

After O’Donnell named consistency as a trait that she admired in Mitt Romney, American Morning’s Carol Costello challenged that premise. “Some people say that Mitt Romney isn’t the most consistent candidate,” Costello said, “because he’s changed his mind about big, important issues over the years.”

“That’s one of the things that I like about him,” O’Donnell replied, right before causing simultaneous forehead slaps all over Romney campaign headquarters. “because he’s been consistent since he changed his mind.”

It was about as artful as a retrospective of colorblind finger-painters, but in context, O’Donnell did manage to nail the spin that Romney hopes will appeal to general election voters. “I think that he’s humble enough to say, ‘I don’t always have the right answers,'” O’Donnell continued. “And he’s open to other viewpoints, and if it doesn’t betray his core convictions, he’ll make the necessary changes.”

One man’s flip-flopper is another man’s open-minded, independent thinker, and it is because so-called “independents” (the people who don’t pay attention, but control every election by insisting upon voting anyway) are susceptible to this spin that Romney’s liberal opponents began to shift away from the flip-flop attack weeks ago.

Later in the interview, though, when confronted with Romney’s political problem with the individual health care mandate, O’Donnell watered down what was already a pretty weak endorsement cocktail. “If you want to — or tea party members. if you want to get behind Michele Bachmann, get behind Rick Santorum, Ron Paul instead of Romney, okay, I can understand that,” O’Donnell said. “But not Newt Gingrich, and I’m really hoping that my endorsement will cause people to give him a second look.”

Based on this interview, I don’t know about a second look, but it’s good for at least a few double-takes.