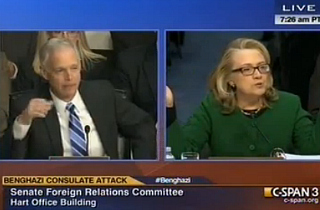 During this morning’s Senate hearing on the September 11, 2012, deadly attacks on the U.S. consulate in Benghazi, Secretary of State Hillary Clinton became visibly exasperated and got into a heated exchange with Sen. Ron Johnson (R-WI), who was grilling her over the administration’s role in formulating post-attack talking points.

A few minutes into Sen. Johnson’s allotted time, he became direct with the Secretary, telling her that “a very simple phone call” to those evacuated from Benghaz “would have ascertained immediately that there was no protest prior to this,” despite what the initial administration reports indicated.

“This attack started at 9:40 p.m. Benghazi time and it was an assault,” Johnson continued, “but i’m going back to then Ambassador Rice five days later going to the sunday shows and what I would say purposefully misleading the American public. Why wasn’t that known and … why weren’t we transparent at that point in time?”

“First of all, senator, I would say that once the assault happened and once we got our people rescued and out, our most immediate concern was number one taking care of their injuries,” Clinton responded. “I certainly did not know of any reports that contradicted the I.C. talking points at the time that Ambassador Rice went on the TV shows. And you know, I just want to say that people have accused Ambassador Rice and the administration of misleading Americans. I can say, trying to be in the middle of this and understanding what was going on, nothing could be further from the truth.”

Sen. Johnson pressed Clinton again to answer whether she agrees that a “simple phone call” to the evacuees would have been a better way to ascertain that there was no organic “protest” leading up to the assault.

“Senator, when you’re in these positions, the last thing you want to do is interfere with any other process going on,” Clinton replied, adding that her State Department was allowing the FBI to first conduct its interviews.

“Well, no, it’s the fact,” Clinton shot back. “Even today, there are questions being raised. We have no doubt they were terrorists, they were militants, they attacked us, they killed our people. But what was going on, and why they were doing what they were doing is still unknown.”

Johnson again suggested Americans were “misled” by the administration into believing there were “protests” that led to the assault, which prompted a forceful response from Clinton: “With all due respect, the fact is we had four dead Americans. Was it because of a protest, or was it because of guys out for a walk one night who decided they’d go kill some Americans? What difference, at this point, does it make?” she asked in an agitated tone.

“It our job to figure out what happened and do everything we can to prevent it from ever happening again, senator. Now, honestly, I will do my best to answer your questions about this. The fact is that people were trying, in real time, to get to the best information,” she concluded before Johnson’s allotted time ran out.