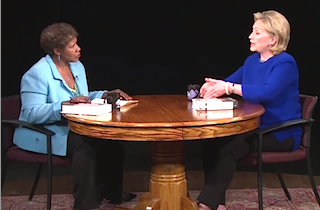 Hillary Clinton sat down for an interview with Gwen Ifill that aired Wednesday evening on PBS NewsHour. And while things remained cordial between the two women for most of the interview, some tension did arise when Ifill brought up comments Clinton has made over the last few weeks about how she and Bill Clinton were “dead broke” after leaving the White House and not “truly well off” like some other Americans.

As Ifill put it, Bill Clinton was “forced to defend” his wife at his own Clinton Global Initiative conference, calling her comments “factually true.” She told the former secretary of state that there’s a “caricature” forming about her that she’s “wealthy and out of touch.”

“I shouldn’t have said the five or so words that I said, but my inartful use of those few words doesn’t change who I am, what I’ve stood for my entire life, what I stand for today,” Clinton responded. She admitted that she and her husband have had “terrific opportunities” and she recognized that that’s not the case for “too many Americans.”

When Clinton said people can try to “take things out of context” or “create a caricature” if they want, Ifill said, “but it stick some times — just ask Mitt Romney.”

“Well, that’s a false equivalency,” Clinton replied. “People can judge me for what I’ve done. And I think when somebody’s out in the public eye, that’s what they do. So I’m fully comfortable with who I am, what I stand for and what I’ve always stood for.”

Perhaps sensing Clinton’s frustration, Ifill clarified her comment. “What I meant by Mitt Romney is there’s a bubble problem sometimes where you can be cut off from people in a regular way.”

Asked how she “avoids” that problem, Clinton said her experience as a senator and as secretary of state “standing up” for the people she represented at home and advocated for abroad “speaks for itself.”