Howard Dean On Meet The Press: “A Long Way To Go” On Health Reform
video

Howard Dean On Meet The Press: “A Long Way To Go” On Health Reform 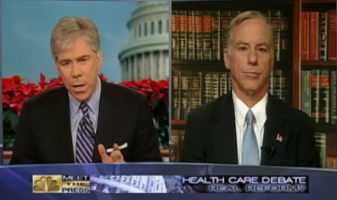 At about 1 a.m. this morning, Senate Democrats prevailed 60-40 in a procedural vote that moved the health reform bill towards final passage this week. But on the eve of that vote, former DNC Chairman Howard Dean continued in his high-profile criticism of the bill from the left.

Speaking on Meet the Press, Dean said there had been “too much” compromise on the bill, and that he “would certainly not vote for this bill if this were the final product:”

Dean had a handful of problems with the health reform bill, among them the fact that it covered 94 percent of the population and wasn’t truly “universal” as such, but he was most rankled by the lack of a public option: “The public option in this bill is allowing the federal government to negotiate with private insurance companies.” Dean said that he was “very disappointed” in the White House over its failure to push for a public option. Still, he said that he would support a final product similar to the health reform bill under consideration in the House: (transcript via RealClearPolitics)

MR. GREGORY: But, Governor, do you really expect the White House to fight for any form of a public option at this stage of the game?

DR. DEAN: Well, obviously we’ve been very disappointed by, by that. We, we don’t think that there has been much fight in the White House for that. Another big piece that needs to be fixed is we–I don’t think we ought to be able to charge older people three times as much as you charge younger people. The House has twice as much, that’s still too much. So there’s a lot of things that need to be fixed. But if they are fixed, you aim–may actually get the foundation of a bill coming out of the House. If most of the House provisions survive, then we could have a bill that we could work with. But this elimination of the public option is a real sticking point, because that, in fact, is how you really save money and bend the curve in expenses.

Last night’s vote was historic, but there are still two more votes to go before the bill becomes law. It remains to be seen whether Senate Democrats keep health reform strictly private, and risk alienating liberals like Dean — or whether they’ll add a public option in conference and risk spooking the centrists.