McCain Weighs In On Visorgate: Why Can’t You Take Palin At Her Word?
video

McCain Weighs In On Visorgate: Why Can’t You Take Palin At Her Word? 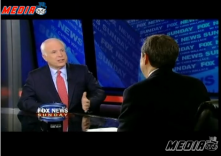 Whatever else John McCain does with the rest of his political life — and lately he’s been doing quite a lot — it’s likely that he is going to be forced to devote some time to explaining the bizarre behavior of Sarah Palin to the rest of the world.

The latest case is point is Sarah Palin’s much talked about decision to black out McCain’s name from a campaign visor she wore to the beach while on vacation with her family earlier this week — a decision she said was made in an effort to remain “incognito.” Yesterday morning on Fox News Sunday Chris Wallace asked a smiling John McCain for his thoughts on the matter.

“Can’t you take her at her word? Sarah, and I, and Todd, and Cindy have a wonderful relationship. We’re dear friends, she is going to be a force in the Republican party for a long time and the hysterical attacks on her from the left continue to validate that. [Wallace presses McCain on the visor] It”s fine! Sarah said she wanted to remain incognito and I understand that but the fact is are we in such a world now where we have climate change, health care reform, all these issues that are going on, massive deficits and we worry about Sarah Palin visor?

Wallace points out that he didn’t ask McCain about Tiger Woods so there’s still hope for serious journalism. Also, who knew that TMZ was part of the Liberal media elite. Also, I suspect that at some point McCain is going to regret admonishing the media and public for not taking Palin at her world. Until then the long, strange road to 2012 continues. Video below.