Huckabee: “It’s A Lot Harder To Beat Obama in 2012” Than Republicans Want To Admit 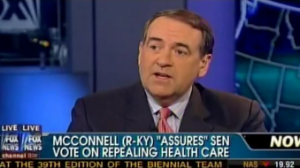 Mike Huckabee joined Megyn Kelly today on Fox News to talk Republican strategy for repeal of the healthcare reform bill, and more interestingly, revealed some of his thoughts about a potential 2012 campaign for President. Kelly informed Huckabee that he often leads polls of prospective GOP candidates, to which Huckabee replied the “American people are extremely smart.”

Kelly provided a legitimate theory as to why Huckabee might be so popular: he doesn’t carry as much baggage with him as potential candidates like Sarah Palin or Newt Gingrich. Huckabee dismissed the significance of polls so early in the process and warned all Republicans that he thinks “it’s a lot harder to beat President Obama in 2012 than a lot of people are saying.” Especially given the fact that, according to Huckabee, Obama has “a billion dollars in the bank.”

Also Kelly raised another provocative question, that if Obama will be so difficult to beat given his incumbency advantage, then why would any Republican want to be the sacrificial lamb running against him and wondered whether Huckabee will really try? Hinting that he’s given plenty of thought to it, Huckabee admitted it will be very difficult given that the Republican primary process will be a “demolition derby of 12 to 20 candidates and [the winner] will come out of that bruised, broke and bleeding.” Yet as much he tries to downplay a campaign, clearly Huckabee is still considering making a run for it.