‘Is This How You Want to Be Remembered?’: Kennedy Faces Off with Jill Stein on Recounts
video

‘Is This How You Want to Be Remembered?’: Kennedy Faces Off with Jill Stein on Recounts 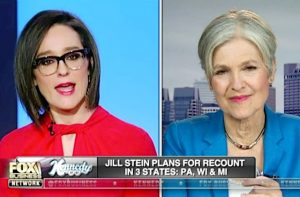 On Fox Business Network tonight, Kennedy faced off with Jill Stein about her push for recounts in Pennsylvania, Wisconsin, and Michigan. Stein said, “This is not a partisan action here. This is on behalf of very frustrated, cynical, disappointed voters.”

She pointed to how there was hacking earlier on in the election, but Kennedy said there’s no evidence to indicate any voting systems were hacked. She pressed Stein on why she’s only focusing on these three states in particular, taking note of how those are all states won by Donald Trump.

Kennedy said that the issues with how the vote in those states turned out were already addressed by data-crunchers as issues of demographics, not irregularities. Stein insisted that she’s just bringing into public view these concerns when “we know there was hacking all around the periphery of this election.”

Earlier today Kennedy said on Fox’s Outnumbered that she thinks Stein’s being used as a pawn, and she asked Stein about who in the Clinton campaign she’s been speaking too.

Stein said their lawyers have been in contact with all the campaigns but clarified, “We are not coordinating with the Clinton campaign.” (A little later, Kennedy remarked, “I’m curious that there is some collusion between your campaign and Hillary Clinton’s campaign.”)

Kennedy offered Stein some words of praise, calling her a “woman of great integrity,” before asking her, “Is this how you want to be remembered?” Stein said she’s been consistent throughout the election on favoring challenges in states where there’s “doubt.”

Watch above, via Fox Business Network.