‘It’s 9/11 All Over Again’: Graham Hits Back At Obama For Press Conference Rebuke On Boston, Benghazi
VIDEO

‘It’s 9/11 All Over Again’: Graham Hits Back At Obama For Press Conference Rebuke On Boston, Benghazi 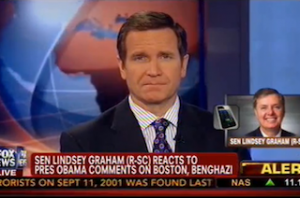 Barely an hour had gone by since President Obama rejected Republican Senator Lindsey Graham‘s suggestion that both Boston and Benghazi represent steps “backwards” on national security and there was the senator calling into Fox News to defend himself. Graham hit back hard against the president, calling the FBI and CIA’s failure to prevent the attack on Boston, “9/11 all over again.”

Echoing the written statement he delivered before going on the air, Graham did not hesitate to go after the president’s comments. “With all due respect to the president we’ve lost eight Americans to radical Islamists in the last seven months. Four dead in Benghazi. Four dead in Boston, and when you look at each case the system failed.”

Pointing to instances in the Boston case leading up to the bombings in which federal agencies failed to communicate information about the older Tsarnaev brother, Graham also drew parallels to 9/11, aided by Fox host Jon Scott. “The FBI did a good job with interviewing him in 2011 but they didn’t follow-up,” Graham said, and when he came back from Russia, “the FBI and the CIA don’t get notified. That is 9/11 all over again.”

On the question of whether the president has done “all he can” to find out exactly what happened during last September’s attack on the U.S. consulate in Benghazi, as he indicated in the press conference, Graham said, “not even close.” Graham credited Fox News for continuing to pursue to Benghazi story but blamed the Obama administration for failing to find the terrorist responsible and said he thinks that “haven’t looked very hard at all. He added, “They’ve been more busy trying to cover up what happened than they have trying to get to the bottom of it.”

Sen. Graham, who is up for re-election in 2014 in his home state of South Carolina and appears to be relishing his role as a primary adversary of President Obama. He was one of the most consistent critics of the administration’s handling of the Benghazi attack and now he has become the main voice of criticism for the president’s handling of the Boston bombings.