Jake Tapper: How Could Officer Wilson Ever Return to Ferguson PD?
VIDEO

Jake Tapper: How Could Officer Wilson Ever Return to Ferguson PD? 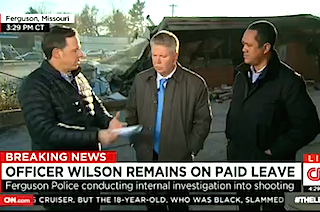 During a press conference Tuesday, Ferguson Mayor James Knowles confirmed that Officer Darren Wilson remains on paid leave from the police department in that city after a grand jury failed to indict him in the shooting death of Michael Brown. Shortly after that announcement occurred, CNN’s Jake Tapper asked St. Louis police union representative and Wilson’s personal friend, Jeff Roorda, how the officer could ever return to the police force after everything that’s happened.

“When it comes to a police officer who has been accused of things and ultimately cleared, how — and I don’t mean this to sound accusatory — but how could he go back to work at the Ferguson Police Department?” Tapper asked Roorda. “Wouldn’t that be awkward for him? Wouldn’t it be potentially difficult for him to do?”

Roorda said there would “certainly be safety and security concerns” before adding that “we’re nowhere close” to a scenario in which Wilson could return to work. “Darren still potentially faces federal civil rights charges,” he said. “He, I’m sure, is going to be sued by the family for harmful death. I’m sure there is a pending internal investigation to determine whether he violated department policies or procedures.”

“While we turned a page yesterday, this chapter in his life is far from over,” he added. “Any cop that was in a situation [like this] would be in a daze right now and trying to grapple with what the reality of their future is.”