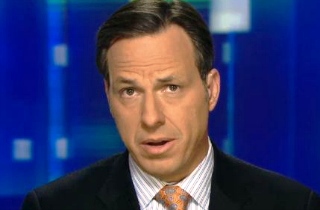 Appearing on Hugh Hewitt‘s radio show Tuesday evening, Jake Tapper commented on the partisan differences in rhetoric during the government shutdown. According to the CNN anchor, the Republicans have seemingly taken to less over-the-top insults than their Democratic opponents.

“Do you think the President and the Democrats’ rhetoric is qualitatively different than the Speaker and the Republicans’ rhetoric?” Hewitt asked.

Tapper’s response: “Well, I haven’t heard the Republicans, we’re just talking about insults now, not anything else. I haven’t heard Republicans comparing the Democrats to suicide bombers or to kidnappers or to arsonists. But it’s possible that I’m not paying close enough attention.”

“I think the only tough talk from the Republicans has been against Republicans,” Hewitt inserted.

Asked whether the tough rhetoric has made it difficult to reach a compromise, Tapper suggested it’s a possibility but that “to be fair to the Democrats here, there has been years of rhetoric of ‘Obama is not from the United States,’ and ‘he is a socialist,’ and so I might be grandfathering in the language that I’ve been hearing for years from the likes of Congressman Broun of Georgia and others, where it’s just so over-the-top, I don’t even notice it necessarily anymore.”

Ultimately, he said, “none of it is helpful,” especially after the president’s senior adviser Dan Pfeiffer went on CNN and perform the “hat trick of comparing the Republicans to suicide bombers, arsonists and kidnappers all in one interview.”

Listen below, via The Hugh Hewitt Show: