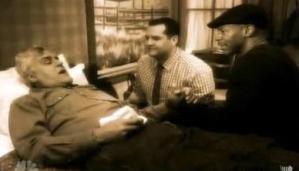 What was the new, old, new Tonight Show like? Well look, if you like Jay Leno, it was vintage Leno. If you exited the earth for the last few months, you might have been surprised by the studio and the opening, but basically, it was the same show Leno was doing back in May.

Here’s a look at what you missed if you were boycotting.

It all started like it was one bad/good dream, with a take-off of The Wizard of Oz. “I went away to the strangest place,” says Leno, laying in a bed, dazed. “It was wonderful but some of it wasn’t so nice.”

And you know who made a cameo? Betty White. Which is ironic, because despite being sort of the hip cameo choice right now, she’s also, you know, 88 years old. She had a good line though: “Look at this ratty ass barn.” (It worked – watch below.)

Then it was monologue time, after a new open and new theme song. “It’s good to be home,” said Leno. “I’m Jay Leno, your host at least for a while.” (For what it’s worth, the “I’m…” beginning to the monologue was how Conan O’Brien started his for the last couple weeks.) Leno brought the self-deprecation (“When it comes to going downhill no ones faster, except NBC”) and the hitting-close-to-home fake segments (“How boring is Alan Greenspan?”). And apparently doing a segment called “World’s Tightest Pants,” showing, wait for it, very tight pants, caused Leno to ask Kevin Eubanks, “Isn’t 11:30 a lot more fun?”

The really big guests start tomorrow – Sarah Palin, Shaun White and Adam Lambert is quite the packed show. And there will be more. But as Leno teased the rest of the week, he made an aside that will stand out to some. “She’s never been on a late night show,” he said of Palin. That would be news to Conan, since Palin was on his show in December.

One prediction – the ratings will be very strong tonight, and all week. And probably for long after that. Some will be turned off by how the NBC late night situation shook out. But how many on Team Conan were big Leno fans to begin with? It will be a story here and elsewhere. We’ll say snarky things about Leno’s corny jokes, and cyber-sigh about when Conan gets to come back on-air while we wait with bated breath for Coco’s next tweet. But Leno, and NBC, will likely be laughing all the way to the bank.

Here’s the opening and monologue: