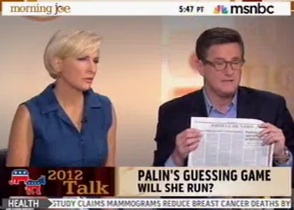 Joe Scarborough is frequently comparing and contrasting Tea Party favorites Sarah Palin and presidential candidate Michele Bachmann. Yet this morning he made a bold declaration that not only is Palin merely acting like Donald Trump, fanning the flames of presidential speculation in order to pump up ratings, but that she’s also become crazed at all the attention the new in girl in town is receiving.

Yet Scarborough wondered why newspapers continue to pay attention to Palin and give her prominent headlines? Mike Barnicle hoped that some time soon everyone in the media could start telling stories about military families and stop wasting time with Palin. And Scarborough concluded, “I am so bored with these Sarah Palin stories.”

First, a point of clarification. During Bachmann’s week of announcing her candidacy for President (arguably the apex of the amount of attention one candidate should expect to receive), if Palin is still the subject of much speculation and fascination in the media, then clearly the spotlight has not been completely stolen by anyone. Is Bachmann getting tons of attention now? Sure, but the stage definitely seems big enough for both women moving forward. And second, Morning Joe is consistently a fun show because they discuss the topics about which people in America are talking. Some Republicans truly want Palin to run for President, while others are seriously concerned that she is grabbing attention away from the real presidential candidates who need it. Either way, Palin’s actions seems like not only a legitimate story to me, but also a consistently interesting one.

Yet if the Morning Joe team is unhappy about covering Palin, here’s a compelling idea: don’t. Scarborough might be bored with Palin stories, but what I find truly boring is when someone laments all the time they are wasting talking about a supposedly unimportant story, as they continue to endlessly talk about it!