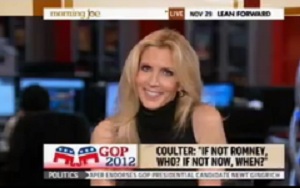 Conservative attention grenade Ann Coulter‘s appearance on MSNBC’s Morning Joe resulted in some predictable shenanigans on her part, but also in shocking silence from host Joe Scarborough following a crass slur of late Sen. Ted Kennedy. Seeking to excuse Mitt Romney‘s position shifts, Coulter noted that Romney had run against Kennedy, and referred to him as “that human pestilence.”

Mike Barnicle pushed back mildly, but Scarborough, friend and colleague of the late Senator, said nothing.

Discussing the ongoing knock on Mitt Romney, that he changes positions more often than a Claymation® model, Coulter defended the candidate by saying, “What don’t they understand about Massachusetts, most liberal state in the union, he ran against Teddy Kennedy? I mean, you’re flipping from positions you held when you came within five points of taking out that human pestilence. C’mon, give the guy a break.”

Morning Joe regular Mike Barnicle seemed somewhat shocked by the jab, and tried to push back as politely as he could. “I don’t know that I’ll do that with Ted Kennedy,” he said. “We miss him in Massachusetts, and I think the country and especially in the Senate, and I think Barack Obama more than anybody, because if Ted Kennedy had been alive, that health care debate would have lasted about five months.”

About 15 minutes later, Scarborough tweeted “I am proud to say that Teddy Kennedy was a friend and very kind to me when others were not. I miss him.” He also echoed that sentiment on the show, after Coulter had left, but never addressed what Coulter had said. I’ve asked Scarborough for an explanation, but he hasn’t yet responded.

This is not about shaming Joe Scarborough, whose obvious affection for Sen. Kennedy should not be in doubt. He was probably shocked and dismayed at Coulter’s remark, and in the moment, made the snap judgment that Barnicle’s gentle rebuke was preferable to calling more attention to it. That was a serious miscalculation, if indeed, that’s what occurred. Scarborough’s decision not to sharply rebut Coulter’s remark is personally disappointing, but his later remembrances of Sen. Kennedy show that this had more to do with a misguided attempt at maintaining comity with a guest than any betrayal of the Senator’s memory.

Coulter’s remark isn’t really the issue, either (nor is my distaste for her; I’ve defended her on many occasions, when it was warranted). This is exactly the sort of thing you would expect from her, and worse. This, and her bleep-worthy screed several minutes later, demonstrate the questionable wisdom of even inviting her on a show like Morning Joe. That Scarborough would have her on the show, and let that remark stand, shows a serious lack of understanding about his audience.

Scarborough’s Morning Joe is a hugely influential show, mainly because it is watched by everyone in Washington, DC. There’s not a journalist or politician in the city who doesn’t tune in daily, if they have a TV. That’s because, whether you agree with Scarborough, or his guests, or his panel of regulars, Morning Joe viewers can expect a lively, intelligent, adult conversation, and we have come to expect Scarborough to keep things from becoming cheap. This was ably demonstrated when the show suspended Mark Halperin for calling President Obama a “dick.” It wasn’t the obscenity, or even the disrespect. It was the way Halperin cheapened the show that merited that punishment.

Coincidentally, I had planned to write a commentary today (and probably still will) about the DNC’s use of a Ronald Reagan clip in its anti-Mitt Romney ad, which, like Coulter’s remark, I thought was cheap and disrespectful. In both cases, there are countless numbers of worse offenses committed daily in the politosphere, but not by my people. As a liberal, I count the DNC among my people, and as a political journalist, I count the Morning Joe crew among them, as well.

Coulter said what she said, and Scarborough appears to have made an honest miscalculation by not responding. He should do so now, not to assuage doubts about his affection and grief over Ted Kennedy, but to let his audience know that this sort of thing won’t be tolerated on his show. It certainly won’t be tolerated by that audience for long.