Jon Stewart And David Letterman Agree On Romney: He’s Nothing But ‘Pixels’
video

Jon Stewart And David Letterman Agree On Romney: He’s Nothing But ‘Pixels’ 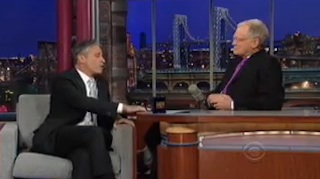 The Comedy Central guys just haven’t been content with staying on their own network this week. Following Stephen Colbert’s appearance on Jimmy Fallon (unfortunately, the last we’re gonna see of him for a few days apparently), Jon Stewart popped on over to CBS for a talk with David Letterman. After discussing topics like sports (Stewart joked that the awful New York Post “Amasian!” headline was “Linsensitive”) and parenting, the conversation turned to politics and the biggest problems facing President Obama (he doesn’t seem to like us) and Mitt Romney (we don’t seem to like him).

First up was Obama, with Stewart worrying that the President might not reelect us this year. Echoing an observation he’s made on his own show, the Daily Show host pointed out to Lettermen that Obama was the only president who started every press conference with a “heavy sigh.” He contrasted Obama’s approach to George W. Bush’s, saying that the former President was like a kid confidently giving a book report on a book he hadn’t read while our current Commander in Chief is like the kid who read the book last year and thinks we’re idiots for just getting around to it. Stewart argued that it, at times, felt like we had “over-corrected” a tad.

However, he explained that the guy he felt “the worst for” is Romney because of how hard he tries to be like “a regular guy” without it having much impact on the voters. Stewart guessed that, even when he’s wearing jeans, Romney probably still has his suit pants on underneath. He then compared the candidate to a motion-capped animated character like those in the Tintin movie; Romney looks like a real person but, inside, “he’s like pixels.”

Letterman had a much simpler view on Romney:

“I know nothing about politics but, as the president, you want someone who makes good decisions. Putting your dog on the roof of your car and driving to Toronto is not a good idea. That’s it. End of story. I don’t care about anything else.”

Of course, if Romney’s dog was all animated like Snowy in Tintin, then we have no problem.