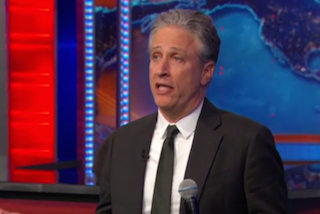 If you’ve ever been to a taping of The Daily Show, you know that before each show Jon Stewart comes out and answers questions from the audience. As the countdown to his final episode next week progresses, Comedy Central has released a compilation of Stewart’s recent interactions with audience members, many of which inevitably revolve around his pending departure.

Asked what the least fun part of hosting The Daily Show is, Stewart sounded particularly ready to stop the everyday grind, saying, “The worst part about any job is they make you go there.”

He said he often has people ask him if, when he’s on vacation and a big story breaks, he wishes he was working to so he could comment on it. His answer? “Never.”

Stewart also talked about one of his post-Daily Show projects, running an animal sanctuary on a farm he purchased in New Jersey. “The plans for the animal sanctuary is to bring animals there and trick them into thinking it’s a sanctuary and then just have a giant barbecue,” he joked.

As for the possibility of a return to stand-up comedy, Stewart said, “That’s how I started and that’s — I’m sure that’s how I will end.”

“Let me make something clear, I’m not dying,” Stewart then told his audience, echoing his initial reaction to the hype over his retirement.