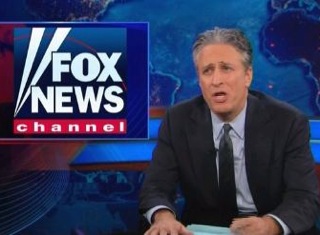 Jon Stewart began his show continuing the news narrative before it was rudely interrupted by another election night: “radio shock-blob Rush Limbaugh” saying something offensive on his radio show. A rare occurrence on what Stewart called his “Noon-3 Mouth Dump,” he joked, but he found the counterweight to the outrage– outrage over Bill Maher saying other stuff on his show– a bit too much, particularly when there are, he explained, consequences to the jokes you make.

While noting that the right had given an homage to Limbaugh on the House floor shortly after 9/11, he noted the worst Maher had used for Republican women– words with Cs and Ts in them. He agreed that they were offensive, but joked to Fox News commentators bringing them up: “let’s get back to what really matters in America: whether Obama is a Sunni or a Shi’ite.” He then played a montage of Fox News commentators complaining that comedians hide under their “clown noses” and “helmets” and are immune to criticism. That, Stewart attested, was just false. “When you’re doing it in a club, there are repercussions– ask Michael Richards and Tracy Morgan. When you do it on television, there are repercussions– ask me,” he argued, playing a clip of Fox News calling him racist.

But it wasn’t just Fox News, he explained, it was the hate mail, “envelopes, some of them handwritten, some of them with white powder.” He remarked that “when I got into comedy, I didn’t think the white powder I’d be getting was anthrax,” and warned the audience to please not snort anthrax. A fairly argumentative rather than joke-filled anti-Fox segment on the Daily Show wouldn’t be complete without some profanity, however, so Stewart concluded: “Fox: shut the fuck up about how victimized you and you alone are. Nobody cares.”